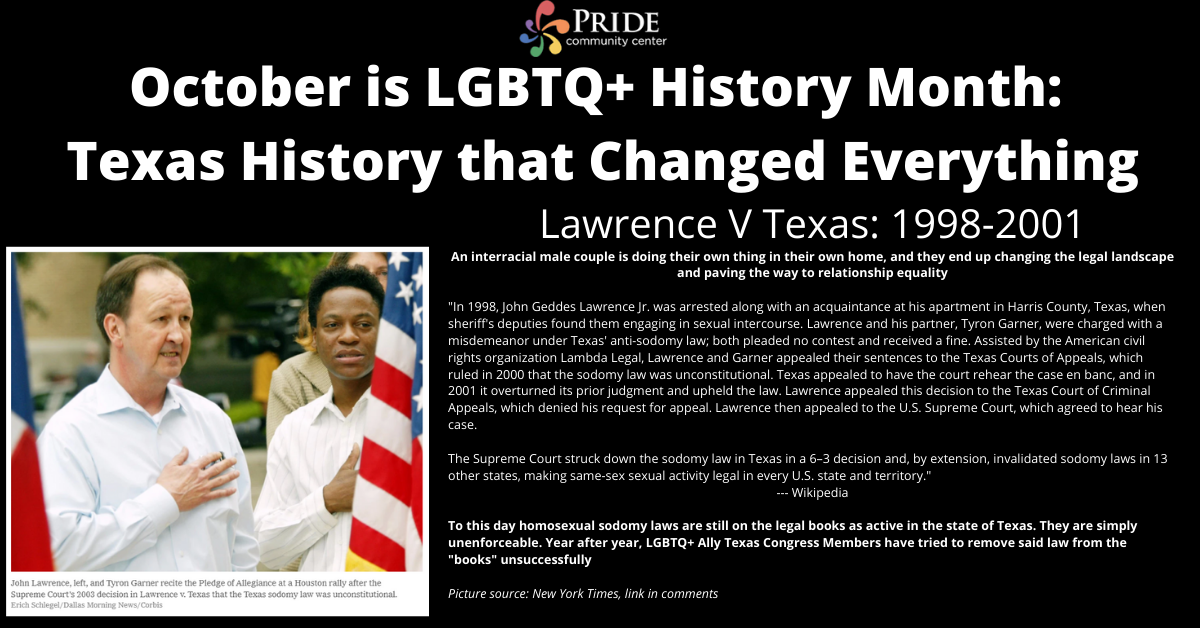 Today Pride Community Center highlights a Texas legal case that changed sodomy laws across the country. It is a story steeped in racism and anti-LGBTQ+ Bigotry

An interracial male couple is doing their own thing in their own home, and they end up changing the legal landscape and paving the way to relationship equality

“In 1998, John Geddes Lawrence Jr. was arrested along with an acquaintance at his apartment in Harris County, Texas, when sheriff’s deputies found them engaging in sexual intercourse. Lawrence and his partner, Tyron Garner, were charged with a misdemeanor under Texas’ anti-sodomy law; both pleaded no contest and received a fine. Assisted by the American civil rights organization Lambda Legal, Lawrence and Garner appealed their sentences to the Texas Courts of Appeals, which ruled in 2000 that the sodomy law was unconstitutional. Texas appealed to have the court rehear the case en banc, and in 2001 it overturned its prior judgment and upheld the law. Lawrence appealed this decision to the Texas Court of Criminal Appeals, which denied his request for appeal. Lawrence then appealed to the U.S. Supreme Court, which agreed to hear his case.

The Supreme Court struck down the sodomy law in Texas in a 6–3 decision and, by extension, invalidated sodomy laws in 13 other states, making same-sex sexual activity legal in every U.S. state and territory.”

To this day homosexual sodomy laws are still on the legal books as active in the state of Texas. They are simply unenforceable. Year after year, LGBTQ+ Ally Texas Congress Members have tried to remove said law from the “books” unsuccessfully